Mike Hill has been in the PWB fabrication industry for over 40 years. Throughout his career, he has been a member of IPC and participated in specification writing for both IPC and the military. Mike is somewhat unique in the industry, having had roles in process engineering, manufacturing, and quality. Within IPC, he has received the President’s Award, General Chairmanship, Committee Chairmanship, and many other recognitions. Mike has helped three different companies obtain military certification to MIL-PRF-31032.

PREVIOUS PAGE
From the Hill

Mike’s columns will help you better understand the requirements and how-to’s for MIL-PRF-31032 certification for PWB fabrication.

From The Hill: Pillars of Mil-Aero Technology and Revenue

The military-aerospace (mil-aero) electronics business is always in constant flux as new methodologies, like AI and space, create the know-how for new PWB designs. In addition, as the number of threats in the world seems to be rising, the need for more unmanned solutions drives more and more electronics. In this column, I have tried to capture some of the most unusual old and new design ideas to support the notion that mil-aero revenue will continue to increase.

To start, Noah Caldwell with Mic assembled a great overview article [1] that provides “a quick run-down of 11 of the DoD’s most famous and influential products.” Here, I share just the highlights. These products not only survived the transition from wartime to peace but also thrived in the consumer market.

New Technology
These four new mil-aero technologies provide a window into the future for any company that wants a piece of history.

1. Smart Bombs Moving to Thinking Bombs
According to Kyle Mizokami, a writer from Popular Mechanics [2]: “Here’s how Golden Horde would work: A pair of jet fighters might target a set of concrete aircraft shelters at an enemy airbase. The first fighter targets four shelters with four CSDB-1s, destroying two. The second fighter, flying right behind the first, releases its CSDB-1s while the first jet’s weapons are already in the air. The second fighter’s bombs receive data that two of the shelters are destroyed. The second flight of bombs, consulting Golden Horde’s playbook, reassigns the bombs in flight to destroy the remaining shelters…In the past, weapons were called ‘smart weapons’ due to their use of onboard maps, lasers, or GPS data to find their targets. Golden Horde, however, takes things a step further by actually making decisions.”

2. Self-Steering Bullets (Image source: DARPA)
Richard Sammon, senior associate editor for Kiplinger [3], explains how self-steering bullets could work. “Packed with tiny sensors, a 0.50-caliber bullet under development can change course rapidly in midair, potentially giving even a mediocre shooter sniper-like accuracy, with the ability to hit moving targets with ease. Plus, while the cost of these advanced rounds is still unknown, they are sure to be cheaper than the rocket-propelled missiles whose role they could sometimes fill. DARPA, which is working on the EXACTO project with military contractor Teledyne Technologies and ammunition maker Orbital ATK, is keeping mum on exactly how the bullet changes its flight path. A competing effort from the Department of Energy’s Sandia Labs uses a laser to indicate the target while small fins on the bullet (also 0.50-caliber) steer it in flight.” 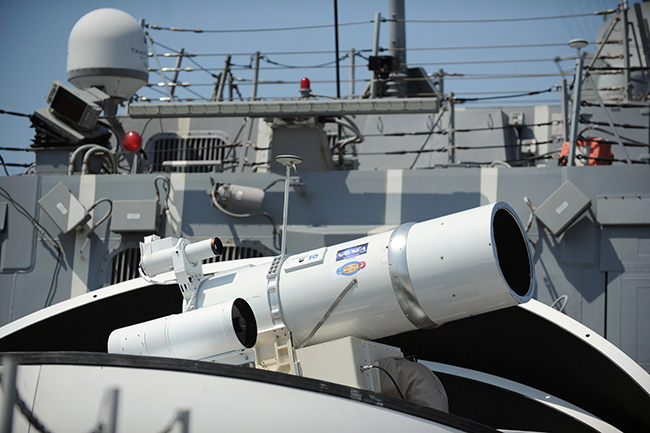 3. Laser Cannons
In the same article [2], Sammon details laser cannons: “The iconic science-fiction weapon is closer than ever to reality. The Navy’s testing of its laser weapon system aboard the USS Ponce in the Persian Gulf went swimmingly, and the Navy expects to deploy even larger laser weapons aboard ships to protect them from threats such as small attack boats and drones. Meanwhile, on land, Boeing and the Army are working on a truck-mounted laser that can zap incoming threats such as mortar shells or drones. This program has the catchy name HEL MD, for High-Energy Laser Mobile Demonstrator. Competitor Lockheed Martin is also looking for a piece of the Defense Department’s ray gun business with its ATHENA system. One of the many benefits of lasers is that they can repeatedly fire for minimal cost—just the diesel to power the truck-mounted generator that provides the bursts of energy the laser concentrates downrange.”

4. Wearable Coronavirus Symptom Detectors
Here is an invention the world could use. Matthew Cox, a defense reporter with Military.com [4], details how “U.S. Army medical officials want the defense industry to create wearable monitors to detect whether service members are displaying symptoms of the novel coronavirus.” “

Army Medical Research and Development Command recently invited defense firms to submit proposals for a $25 million effort to design prototypes of a wearable diagnostic capability for ‘pre-/very early symptomatic detection of COVID-19 infection,’ according to a recent request for project proposals issued through the Medical Technology Enterprise Consortium (MTEC). ‘There is a dire and urgent need for the development of rapid, accurate wearable diagnostics to identify and isolate pre-symptomatic COVID-19 cases and ... prevent the spread of the virus,’ the solicitation states.” Summary As we use some of these technologies in our everyday life, it’s easy to create emotional ties to the mil-aero revenue stream. PWB fabricators that want to be part of history have a revenue stream from products that might have contracts for a decade or more and, like challenging new technology, should consider certification to MIL-PRF-31032 (printed wiring board requirements for the DoD).

This column first appeared in the September 2020 issue of PCB007 Magazine.

From The Hill: Pillars of Mil-Aero Technology and Revenue

The military-aerospace (mil-aero) electronics business is always in constant flux as new methodologies, like AI and space, create the know-how for new PWB designs. Mike Hill captures some of the most unusual old and new design ideas to support the notion that mil-aero revenue will continue to increase.

From the Hill: 7 Steps for MIL-PRF-31032 Certification

Mike Hill's past columns have detailed how military electronics are being used in an ever-increasing application rate. In this column, he shares seven certification steps, resources, and timetables for consideration when certifying to MIL-PRF-31032.

From the Hill: MIL-PRF-31032 Offers a Rewarding Twist

If you are fabricating PWBs to military specifications, the master drawing will state: “Fabricate to MIL-PRF-55110, MIL-PRF-50884, or MIL-PRF-31032.” This sounds very complicated on the surface, but there is a rewarding “twist” if the fabricator is certified to MIL-PRF-31032. Mike Hill explains.

From the Hill: Sampling Plan Language in MIL-PRF-31032

Conformance to military standards is all about using the correct sample specimen and testing the proper quantity. However, military specifications have numerous tests with various sample specimen types that all require different quantities for test or inspection. Mike Hill provides an overview of the key parts of compliance.

From the Hill: Have You Hugged Your Technical Review Board Lately?

The Technical Review Board’s (TRB's) duties and responsibilities are the glue that connects the dots between the site, the Defense Logistics Agency (DLA), and the associated military revenue stream. Understanding these duties will help with resource allocation, general support, site priorities, and, most importantly, yearly re-certification to MIL-PRF-31032. Mike Hill explains the function of the TRB as it pertains to MIL-PRF-31032 (military requirements for printed wiring board fabrication).

From the Hill: Technology and Reliability Demands Drive Designers and MIL-PRF-31032 Specification

With the future demand for more and more military electronics, certification to the PCB MIL-PRF-31032 specification becomes a business decision for many fabricators. Fluency in the MIL-PRF-31032 language is a key first step to understand the requirements and communicate with the DoD. Mike Hill defines many terms related to this military specification that you should review before informing the DoD of your intent to certify.

The Part 1 of this column series introduced background information and data from changes in military certification to MIL-PRF-31032 from 2003 to 2018. In this installment, Mike Hill provides an overview of the possible related factors to what could have caused the reduction in certified companies, including a decline in the total military market; cost of certification; and number of military boards now built to industry standards, to name a few.

Fifteen years ago, when certification to MIL-PRF-31032 was in the early years, I authored an article about certification status. Now, it’s time to revisit the subject, data, and changes that have occurred since.