Dan Beaulieu has over 35 years of experience in the printed circuit board industry. He is considered one of the industry's top marketing and sales experts, as well as perhaps the strongest and most focused strategist in the industry. His main focus is helping the companies he works with to achieve their fullest potential

Mr. Beaulieu is also a well-known industry writer and columnist writing sales and marketing columns including contributing to Printed Circuit Design and Manufacture, U.S. Tech, Printed Circuit News and The ERA Representer. He is best known for his work with I-Connect007 for whom he has contributed numerous interviews both print and video with some of the industry's most renown leaders. He is also the author of the popular weekly column It’s Only Common Sense for which he has written over 400 columns and counting.

Since co-founding D.B.Management Group, Mr. Beaulieu has worked personally with numerous companies among them PCB Fabricators: Prototron Circuits, Murrietta Circuits, American Standard Circuits, Sierra Circuits and over 100 others, as well as peripheral companies such as: The Gardien Group, Taiyo America and RBP Chemicals.

Dan’s Biz Bookshelf: Own Your Weird

Own Your Weird: An Oddly Effective Way for Finding Happiness in Work, Life, and Love

Okay, this book is weird, but in a good way. After the first few pages, I realized that this is not a business book like any I have ever read before. But still it had value, so I decided to read on. If nothing else the book and the author himself were entertaining.

Jason Zook is the kind of guy who would be thrown off Shark Tank, but not before the Sharks had fun asking him questions and getting the best laughs they could out of his stint on the show.

The author writes about how he started a number of businesses, admittedly not many of them successful, but none of them boring.

One of his first businesses was IWearYourShirt. In this business, companies paid him to walk around in their walking advertisement of a t-shirt. His first customer paid him a dollar. And since he went crazy advertising this company, he ended up $100,000 in debt.

His second business was called BuyMyLastName, and the premise was he would offer his last name to the highest bidder and then become a walking billboard for that company. The highest bidder paid $45,000 for Jason to become “Jason Headsetdotcom.” And then later he changed his name to “Jason SurfrAPP” and he made $100,000 with that business.

He also started a business where he live streamed himself writing a book. People would pay to tune in and watch him writing live. In fact, it was this very book that I am reviewing right now.

Jason is fearless, and it is rare to find an entrepreneur who is so willing to get out there on that proverbial limb, willing to make a fool of himself. Frankly I love that.

We are all too stuffy, we are all practically cowards when it comes to risk; in reality, not taking risk in this era of constant and rapid change is the riskiest thing we can do.

This book was filled with lessons of inspiration when it comes to being creative and coming up with a money-making idea that no one has ever heard of.

The last chapter of the book has some very sound advice about creating and executing ideas:

I’ll leave you with this. If you have no sense of humor about business or about life in general, this book is not for you. But if you like to smile when your reading, this book is perfect for you. You’ll learn something along the way.

I’m thinking of changing my name to “Danatreadallaboutitdotcom.” 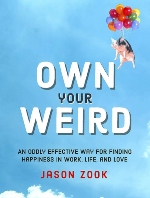 Own Your Weird: An Oddly Effective Way for Finding Happiness in Work, Life, and Love

Dan’s Biz Bookshelf: Own Your Weird

Take some cues from this serial entrepreneur whose ideas are refreshingly creative, even if they aren't all successful. Find lessons of inspiration in a way you've never heard before.

Dan’s Biz Bookshelf: The Obstacle is the Way

Even though this book was published in 2014, it’s message is perfect for the past almost two years we have been living through. This book as the title indicates is all about handling obstacles that stand in the way of achieving our goals.

Dan's Biz Bookshelf: Design Is How It Works

Jay Greene visits with eight of the most iconic companies in the world to discuss and describe how they handle design and innovation, which includes how they handle their product designers. It's fascinating and worth the read.

Okay, nobody thinks that Jack Reacher is in business, right? Those of us who are Reacher fans (of the books, not the mini-me Reacher played by little Tommy Cruise in the movies) know that this six-foot-five, 225 pounds of solid muscle is in the business of taking care of business.

Dan's Biz Bookshelf: Blockchain—The Next Everything

The technology that allows crypto currency to exist is called blockchain and it is much more than just a system that supports bitcoin. In fact, bitcoin is just the tip of the proverbial iceberg when it comes to blockchain.

Dan's Biz Bookshelf: The Future is Faster Than You Think

Hold onto your hat, folks. The ride into the future (literally) is flying at speeds never before imagined. This book provides a significant look into today's, and tomorrow's, technology.

If you want a book that not only shows how to be creative and spark your own creativity, but provides real-life examples of what true originality looks like, this is the book for you. It is a small book filled with 119 ways to spark your own creativity. I love this book. I keep it on my desk at all times so that when I get stuck for an idea to write about, I look through it and I always find something that will get my engine running again.

The thing I like most about Nancy Marshall’s book Grow Your Audience, Grow Your Brand is that she takes what some of us think are a very complicated passage through social media and makes it simple and understandable. From the explanation of content marketing in the first chapter, to the chapter on developing your brand story, Marshall (also known as “the PR Maven”) describes in clear and concise terms not only how these marketing and branding tools work but how to create them as well.

If one thing has become clear during the pandemic, more people are using social media to communicate. Use that to your advantage in your business. Dan reviews helpful tips from this book by Jeffrey Gitomer.

Change is Good… You Go First: 21 Ways to Inspire Change focuses on this dichotomy: Everyone acknowledges that businesses must evolve, but no one want to be the first to change.